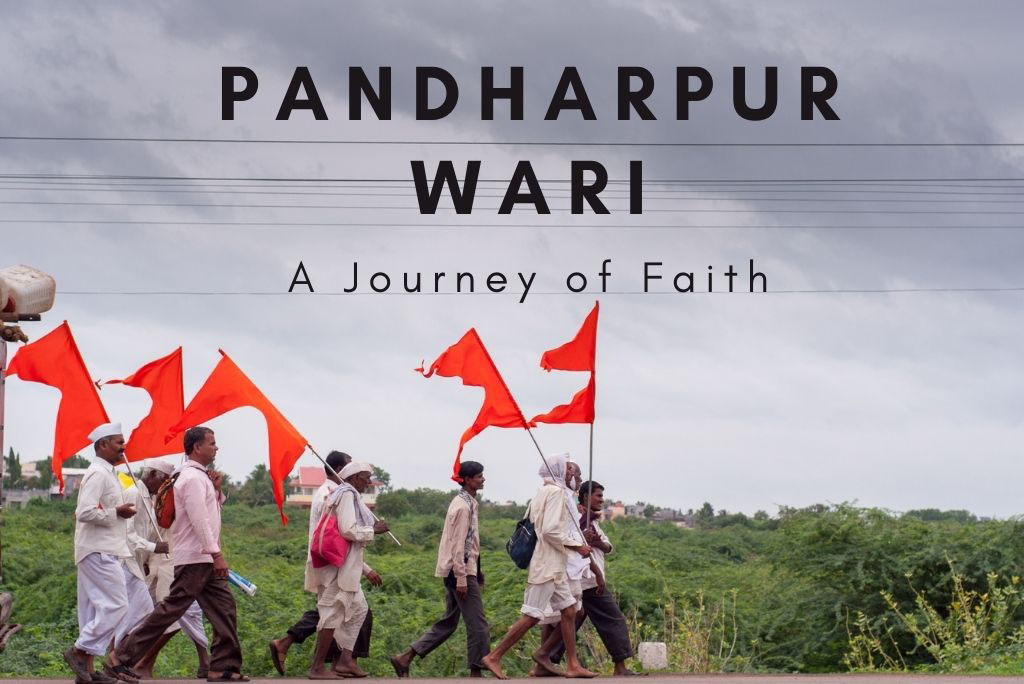 Before I start, let me give you a brief introduction of the event.

What is Pandharpur Wari?

Thousands of people called &lsquoVarkari’ reach Pandharpur from Alandi or Dehu after walking for about 250kms in Aashad (a hindu month which coincides with June/ July) Ekadashi (11th day of the moon). They walk with palkhis (chariots) carrying paduka (sandals) of the saints singing sacred songs.

Warkaris are a Hindu religion sect who workship Vithoba (or Vitthal), an incarnation of Krishna.

Where is Pandharpur Located?

Pandharpur is located in the state of Maharashtra about 73kms from Solapur and 211kms from Pune and 360kms from Mumbai.

How To Reach Pandharpur From Pune?

The distance of Pandharpur from Pune is 211kms and will take about 5 hours.
If you are on budget, the best way to reach Pandharpur is by local buses. If you don’t get a direct one, you can always change at Indapur.
If you have your own car, you can drive down. Be aware that it can be extremely crowded.

The day the Waris reach Pandharpur is a day before Ashadhi Ekadashi according to Hindu calendar. It is generally in the month of July.

Travelling to Pandharpur was a very hasty decision taken at the last moment but I didnt want to miss it this year. We took a train to Solapur from Hyderabad and then a local bus to Pandharpur.

To shoot in the morning light, we decided to reach late night at Pandharpur and stay there rather than at Solapur. By the time we reached there, it was already past midnight. We did not have any advance booking and were struggling to find a place to stay. As we were doing hotel hunting, I did not miss any opportunity to take some shots. It was surprising that even at the middle of the night, there were lots of people around.

The bus stand when we reached Pandharpur...

The first view of the temple....

After a search for about an hour and finding absolutely no options, we gave up and decided to spend the night at the bus station sitting on one of the benches. Travelling has it own adventures, and it makes you mentally strong and fearless to be prepared for the unforeseen.

We woke up early, and took an auto to Wakhari – the place where the palaki was supposed to reach that day. It was unbelievable to see the unending stretch of Dindis (or groups) approaching Pandharpur. It was drizzling but the devotees continued their march. The first views of the procession.

Women carry Tulsi (basil) plants on their head to offer at the temple Some even read sacred books on the way.

I have made a few padyatras (journeys on foot) before and could understand how difficult it can be walking for 20 days in sun and rain.

Singing and Dancing All the Way

They also perform a tradition folk dance called fugdi which energizes them.

Every group has a leader wearing a special uniform and a hat. He controls the movement of the group and to check if anyone is left behind.

Most of these people stay in temporary tents beside the road. Many spend the nights in trucks which also serve as a place for keeping their luggage.

Many people, who can’t afford, carry all their stuff on their head all the way.

Though I was just for a day and was not able to capture all the flavours of the yatra, nevertheless, I really enjoyed it.

I hope you enjoyed reading this. I will bring back more next year!

Edit: I was so moved by the devotion of the people that I went there next year as well. Read about my next visit here

Read about my second visit to Pandharpur Wari HERE

I should really thank the warkaris, they were so kind and cooperative while I was shooting them. They had a lot of patience even after going through so much of hardship walking for 20 days.