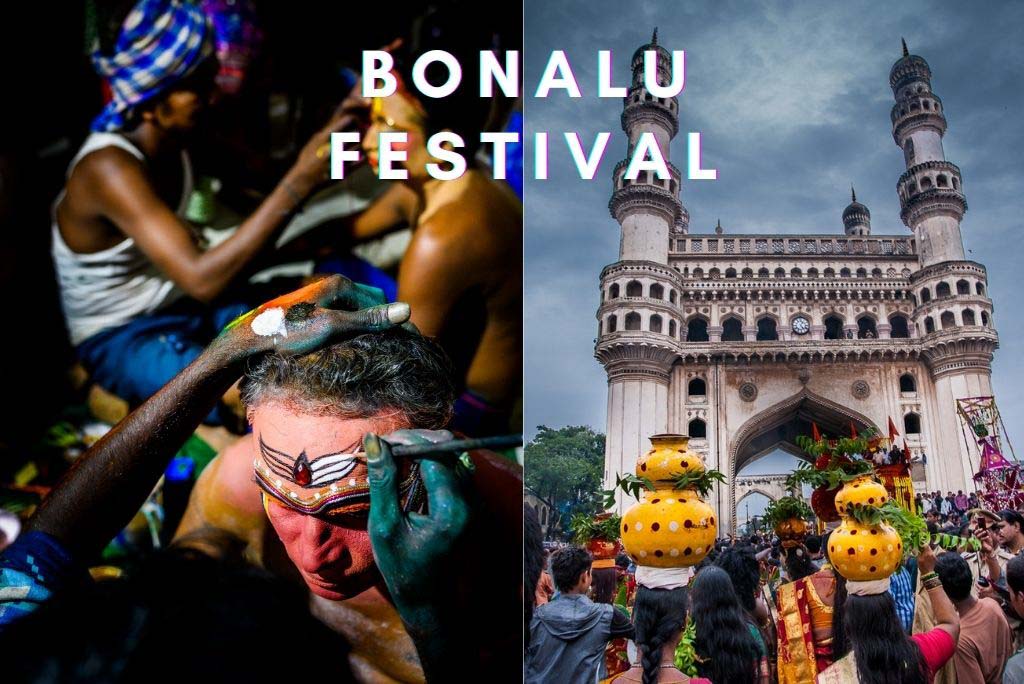 Come July, the whole of Hyderabad and Secunderabad gets immersed in the festival of Bonalu.

Bonalu is the most popular festival in Hyderabad.

Bonalu is derived from the word Bonam meaning meal that is offered to the Goddess Mahankali. Women prepare a special offering for the god made of rice cooked with jaggery and milk in an earthen or metal pot. The sacred pot is decorated with neem leaves, vermillion, and turmeric and is carried by women on their heads. They also offer bangles and saree to the goddess.

Plague broke out in the twin cities of Hyderabad and Secunderabad in 1813. During that time, a battalion from Hyderabad state was posted in Ujjain, Madhya Pradesh. When they learnt about the situation in the cities, they prayed to the Mother Goddess in Mahankaal Temple in Ujjain.

They vowed to install the idol of Mahankaali back in Secunderabad if things normalise. Fortunately, things got better and the battalion came back and installed the Goddess Mahahankali in Secunderabad and offered Bonalu to her. Since then it has become a tradition and it is still followed by the people of the State.

Bonalu is celebrated in different parts of the city. The celebrations start at the Golconda Fort in Hyderabad on the first Sunday of Aashadham. On the second Sunday at Balkampet Yellamma temple in Balkampet and Secunderabad’s Ujjaini Mahakali Temple and on the third Sunday at Lal Darwaza, Old city of Hyderabad’s Matheswari temple, Muthyalamma temple in Shah Ali Banda, and in Haribowli’s Akkanna Madanna temple are few main temples where Bonalu is celebrated. Lakhs of devotees gather temples to worship Mahankali every year.

Women dress up in traditional Saris along with jewels and other accessories whereas the teenage girls dress up bringing out the beauty of the attire by wearing traditional Half- Saris combining with jewels. It is believed that women carrying Bonalu possess the spirit of Mother Goddess and when they approach the temple, people pour water on their feet to pacify the spirit, as believed to be aggressive by nature.
Bonalu is a festival of divine offering to Mother Goddess and families also share these offerings with other family members and guests. After the great offering, the non-vegetarian family feasts. Usually its the meat of goat or a chicken which is offered ceremonially (Bali in Telugu) to Mother Goddess which is considered sacred and alcohol offering is also a must tradition.

Here is a collection of pictures from Bonalu around Charminar, which is the most grand and happens on the last day.

Devotees offer Thottelu to the Mother Goddess. These are small colorful paper structures supported by sticks which are offered as mark of respect. Pothuraju is considered the brother of Mother Goddess. He is described in the procession as a muscular, bare-bodied man wearing a small tightly draped red dhoti with bells on his ankles, greased with turmeric on his body and vermilion on his forehead. Pothuraju dances to the loud drums close to Palaharam Bandi, the procession. He lashes whips on himself, has neem leaves tied around his waists. Ghatam is a copper pot which is decorated in the form of Mother Goddess and carried by a priest, dressed up in a traditional dhoti. His body is completely coated in turmeric. The Ghatam is taken as a procession from first day of the festival to the last day when it is immersed in water, which concludes the festival. The Ghatam is escorted by drums. It is followed after Rangam.

0. Know the dates from a local person. It is published in newspapers.
1. Be quick and agile, or else you will miss the moments.
2. Don’t stand only at one place, you will get the same kind of pictures – move around for better opportunities.
3. Since the festival happens during the rainy season, do carry a waterproof for your camera.
4. Be early and look for the locations.
5. Prepare yourself on what you want to shoot and carry your lenses accordingly.

Thanks to my friend Rajesh Pamnani who always accompanied me for these occasions and for being a great motivator.