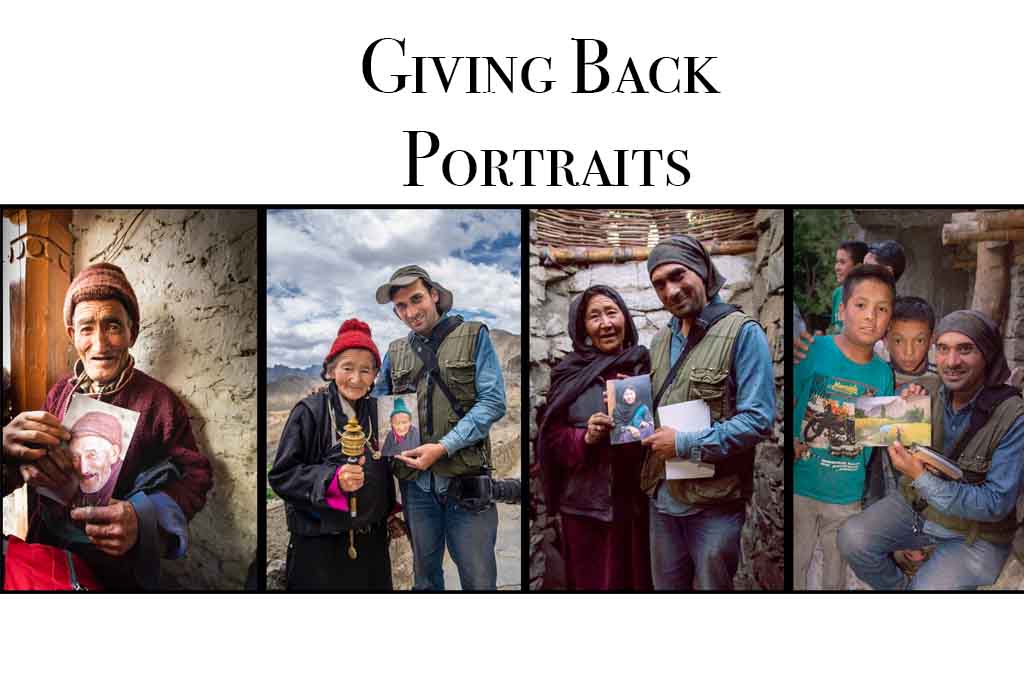 This is the best travel portrait photography suggestion I can ever give you. And it will change your attitude towards photography and will surely help you become a better photographer. Read on...

We, Photographers, are Selfish People

We portrait photographers are very selfish people. I am talking with respect to travel portraits that we do when I travel and meet people with interesting faces.

We spent we spend time with the subjects, shoot them, entering their houses, sometimes in invading their privacy.

Most people in India are very magnanimous. They don't mind you taking a picture. You just have to speak to them and convince them.

After taking the pictures we come back home we process them, feeling accomplished about the great shots we have taken and forget about the subject as a human being.

Subsequently, we post them on social media and send it to several competitions and get awards and recognitions. It makes us famous.

But, what about the subject who spend time with you? Has it made a difference in his life? No.

Since I go back to the same places multiple times as I lead Photography Tours, once I decided to print pictures and give it to the people who they belong to - the subjects.

It was a very enriching experience for me.

I did it for the first time in Gandhari village in Telangana.

I still remember those moments. I reached the center of the village and showed a picture of the person I came across. I asked him where I could find the person. He was a little surprised when I came and took the pictures. I told him, that I came a year back. He was so excited to see it. I could see the shine in his eyes and the smile on his lips.

He asked me to wait there, while he would call the person. I said I have more. I had pictures of almost everybody in the small village. in 10 minutes, everybody in the village came there as I was distributing the pictures.

These people were seeing their pictures after year. Some had become fat, some lean. The kids had grown up and were difficult to recognize.

It was like a festival in the village and we were being treated as their own. It was amazing how taking this minuscule effort can help you connect to people at a different level.

After the distribution was over, they offered us to have lunch with them before we leave. We were a little hesitant, but they won't let go. Finally, we had lunch with the village people.

It was one of the most memorable experiences in my photography life.

I went back to feeling that there are people who value my pictures.

There was another incident that really moved me. I took a picture of this young gentleman who must be in his 30s. This was in Chitkul Village, Kinnaur Valley, Himachal Pradesh. He was not very photogenic and the light was not great, according to me.

We are very selfish people. We would shoot only those subjects makes a great picture, an award-winning picture. The gentleman saw the camera in my hand and requested a picture. I didn't want to, but just for the sake of it, I took a picture. I showed it to him and that was it.

I knew it was not a great picture for me, and I almost forgot about it.

It was in my hard drive for almost a year, unseen. When I was going there again for my Photography Tour to Spiti, I was looking for pictures that I would print and give to the people, I found that one as well. along with the other pictures, I took a print.

As I was going around in the village, I could recognize the house where to get pictures. it was because there was an ibex on the door of the house. I knocked on the door and a young lady came out. I showed her the picture. as usual, I was thinking it would bring a smile to her face. for some reason, she froze. Her eyes were watery. I was wondering what happened and asked her. she told me that the picture was of husband’s and that he passed away in a road accident a couple of months back.

For me, the picture was a very ordinary one but I am sure she is going to preserve the photo for the whole of her life. Perhaps, that's the only print she possesses of her husband.

That really changed my perspective on the definition of a good picture. For me, that was a very ordinary picture, but for her, probably, the best picture in the world.

The Feeling of Not Being Good Enough

I always feel that my pictures are not good enough. We all; most of us live with similar feelings. Once in a while if you win a competition, we feel better. But that's probably a rare occasion if you are not an outstanding photographer like I am.

After I started giving my pictures to people, I started feeling that my pictures are great. somebody values them, frames them, and preserves them.

Eventually, that affects the way I take pictures it gives me a lot of confidence, and I am able to take better pictures.

Photographers are gifted. If you want to give the same amount of happiness that you can by giving a print, you might have to put in a lot of effort.

I meet my school friend, Partha after decades. During a meeting at his home, I took a few pictures of him with his daughter. I took a Canvas print and send it to him later. He was extremely happy. If I had to give the same amount of happiness by doing something else I guess I would have to put in a lot of effort.

That is the advantage we photographers have. Why not use our potential in bringing happiness.

I was listening to a Ted Talk and the speaker was talking about synthesizing happiness are creating happiness rather than let happiness come to you. This Is a great way of doing that.

The Joy of Giving and its Benefits

Since time immemorial, a lot of people have talked about the power of giving and what it can do to you. There are thousands of books on that.

I personally feel I have the ability to make people smile by giving a print. and it does not really cost a lot.

So dig out those files lying dormant in hard drives. Organize them, print them, and see how powerful these pictures are. The ones that you thought were average and of no use have the potential to bring a smile.

They have the power to create happiness and that's what we all die for.

My first subject whom I gave a print in Gandhari Village, Telangana

Chitkul Village Lahaul Himachal Pradesh. This man told me that there are so many who come and take pictures and promise to give a print, but I was the first one to do so.

There are women from Nako Village in Spiti Valley. Luckily, they were going for a wedding when I took their picture. They were in their best traditional attire.

From Kibber Village, Spiti Valley. This is another occation when the villagers were having a look at all the pictures and identifying the subjects and telling me where to find them.

This elderly gentleman is unfortunately no more. Came to know when I went to meet him again.

A young monk from Key Monastery. We had to wait for about 30 mins as he was in a class. What a pleasant surprise it was for him.

This was one is the best experiences. I tool a picture of this cute little girl Shivani last year during my Photography Tour to Spiti.
She was first surprised when I took her picture. She was extremely happy and went home. After 5 minutes, she came back with her mother. She thanked me for the picture and asked us to wait. She brought a dozen apples for everyone in my team. Initially, I was a bit hesitant, but after she insisted, I accepted them. These people grow apples as their profession.

I shot this girl in 2009 when she was a kid. Never met her again. This time I was determined to find her. It is sometimes difficult to meet as many get married to neighboring villages. I finally met her in 2019, after 10 years

You might find it strange or not appropriate to take pictures of people. Many think it is an invasion of privacy. I don't think that way. I feel it is my way of creating happiness.

If I take a picture and show it to them on the LCD, it immediately brings a smile to their faces. We all love to see ourselves, right?

To go beyond that, I sometimes go back to the same places with prints and give it to them. that makes them extremely happy. That is my purpose of taking a picture for creating happiness.

Also, the picture goes back to the person who it belongs to - the subject. Go there with a smile on your face, interact with them, or take candid moments, and show the picture to them. You will be surprised, how friendly people are, and how much they love to get photographed.

Try it once in your locality, maybe with your neighbor, vegetable seller, or your security guard. Do let me know how your experience was. I'm eager to hear from you.

Thanks to the photographers who have taken these pictures for me. It will be difficult to mention names, but I'm really grateful.

Thank you for reading this blog. Please SHARE this with others so that we all photographers start doing something similar and make the world a better place. It will also make it easy for photographers to take pictures and will be good for the whole photography fraternity.