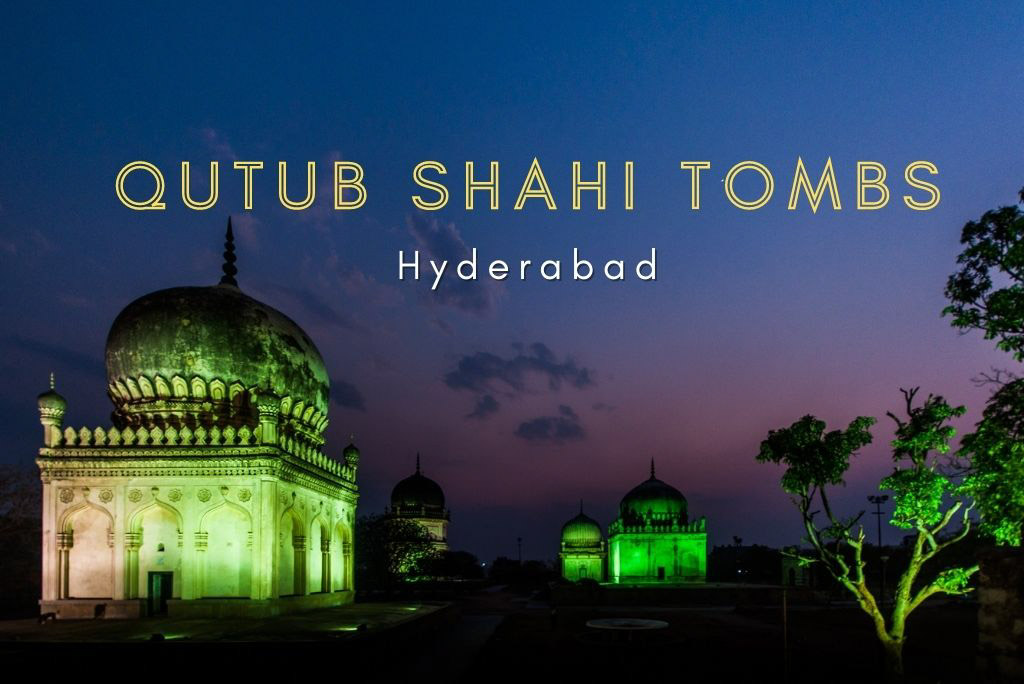 The Qutub Shahi Tombs or the 7 Tombs is one of the must-see places in Hyderabad. I have visited these tombs several times during our Photowalks in Hyderabad.

If you are in Hyderabad for a short visit, I can take you to the best places at the right time so that you can go back with a great experience and some awesome pictures.

Qutub Shahi Tombs ticket costs Rs.10/- per person. If you are carrying a camera, you have to pay an additional fee of Rs.20/-

Each tomb has a stone coffin on which lies the actual burial pit in a crypt below.

The architecture is a mixture of Hindu, Pathan, and Persian styles. The minarets exhibit Islamic architecture. Originally these tombs were planned and built by Qutub Shahis, later in the 19th century, it was modernized by Salar Jung III, Mir Yousuf Ali Khan.

The tombs are in quadrangular shape and are in a dome-shaped structure. Grey granite was used to make these tombs on an inflated platform. These tombs look similar but once you start observing keenly each tomb is unique and has different details. Each tomb is decorated with beautiful ornamentation. There are pointed arches surrounded by each tomb which is 9-15 meters in height from the platform.

The seven Qutab Shahi Tombs vary in size. Smaller tombs have single storey while the bigger tombs have two storeys. The fifth king of the Qutub Shahi dynasty, Mohammed Quli Qutub Shah's is the largest of all the tombs.

Sultan Quli Qutub-ul-Mulk, the founder built his tomb and was the longest supervisor of the architectural project. The most remarkable tomb belongs to Mohammed Quli Qutub Shah, the founder of Hyderabad which rises to the height of 42 meters with the largest dome. The corridors of these tombs are of the Indo-Saracenic style of architecture.

There is an unfinished tomb Mirza Nizamuddin Ahmed, the eldest Son-in-law of Sultan Abdullah Qutub Shah. Sultan Quli Qutb ul Mulk built a mortuary bath while constructing his own tomb for the performance of the ritual bath of the royal dead.

There is a small museum inside the compound of the tombs with antique collections of Qutb Shahi period.

Golkonda fort can be seen from these Tombs as it is just 2 kms away from it.
Like the Paigah tombs which are dedicated to their royal families, Qutub Shahis also built tombs for their non-ruling members of the royal families as well, like the sisters, nieces and nephews, some ministers also.

Please note that these pictures were taken long back.

The tombs now don a new look as it was beautifully restored by the Agha Khan Trust with a lot of effort.

1. The best time to go there is in the evenings, an hour before sunset, preferably during the weekend. That’s when you will find lots of activities.
2. The tombs closed by sunset, be on time.
3. Fortunately, the tombs are renovated now for longevity but has lost its rustic look. Hence, it might not look the way you see in these pictures.

Thanks to all my students and photo tour participants who have come here with me.