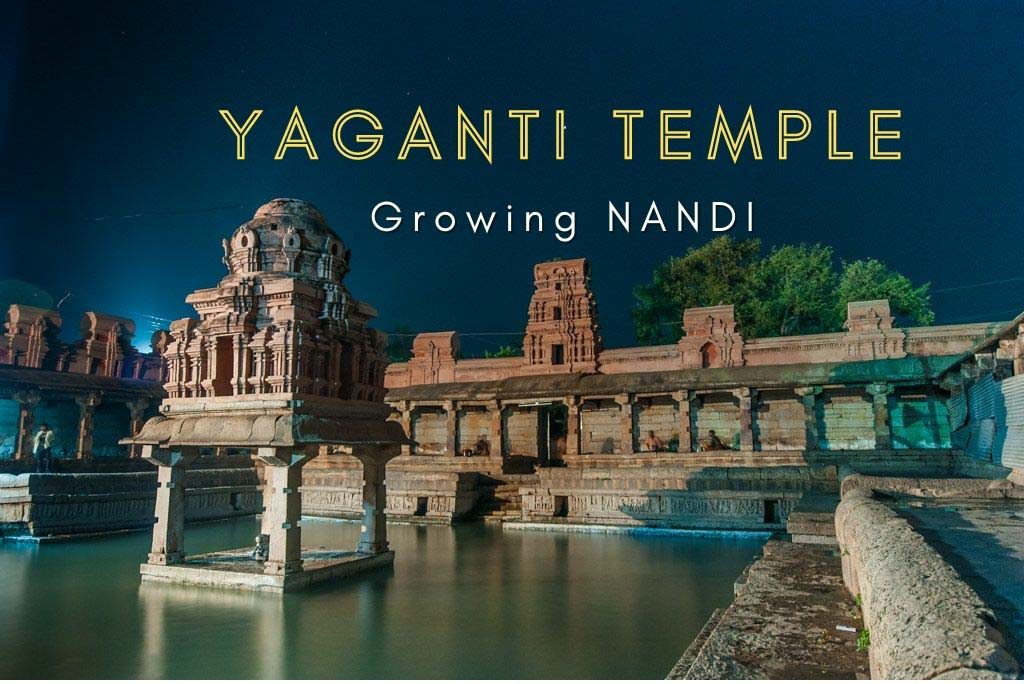 If you want to have a weekend trip which is a combination of a pilgrimage, adventure, geological wonders, and something close to nature around Hyderabad, the drive to Yaganti would probably top the list.

Yaganti is famous for the Sri Yaganti Uma Maheswara Swamy Temple. It was constructed by the first Vijayanagara Sangama King Harihara Bukka Rayalu in the 15th century.

It was another exciting bike trip. The best thing about bike trips is that you can stop wherever you want, take out your camera, shoot and carry on…

One of the green fields we passed en route.

The route was scenic and we had to pass through some hills with awesome roads.

We passed by a village where some people dressed as Rama and other mythological characters were performing from door to door. This was very common since ages. Unfortunately, television almost killed these traditions.

Another character from the same group

Commuting from one place to another is a big challenge for the villagers. In this particular shot you can see how a man is travelling dangerously hanging onto the auto. He is carrying his cycle on the top so that he does not have to walk for kilometers after he gets down.

The temple and around…

The temple is located in a forest area. As we approached the temple, we found a lot of people out of nowhere.

There were shops selling heaps of vermilion.

There are several cave temples in Yaganti adjacent to the main temple. Agastya cave is believed to be the place where saint Agastya performed penance to get Lord Shiva’s blessings. Venkateswara Cave is another one. Locals believe that the Venkateshwara idol in the cave existed much before Tirupati. Veera Brahmam Cave is the place where Potuluri Veera Brahmam, who is known as India’s Nostradamus wrote some chapters of his prophecies – the Kala Gnanam.

The caves are open for worship from dusk to dawn. Though there is hardly any natural light, sufficient artificial lights are provided inside.

There were a few priests performing puja inside.

The temple is adjacent to the cave. As we entered the sanctum, it was getting dark.

We passed by the temple pool where the worker was cleaning the utensils in which food is offered to the gods.

There is a burning lamp called akasha deepam (meaning sky lamp) on the top of the temple in the backdrop. It is lit up every day and it glows from dusk to dawn.

We entered the temple.

It’s not just a belief but a fact that the Nandi idol facing Shiva has been growing in its size over the years. This has been confirmed by the Archeological Survey of India. Science explains this as a geological phenomena. Worshipers think it to be a miracle.

It is one of the very unique temples in India. I would surely include this temple in my top 10 list of temples to see, because of its location and this phenomena.

This picture clearly shows that the Nandi has outgrown its designated space.

I was a bit disappointed that it was already dark and would have to put my camera to rest. Fortunately, there photographic opportunities were many.

Offerings to the god –

There were many devotees singing hymns in praise of the Lord

One of the salient features of the temple is the Pushkarani (or the temple pond) which remains full of water even during the driest season. As a custom, people take bath in its holy waters before doing puja to Lord Shiva.

Though we wanted to spend the night in Yaganti, there was no accommodation available. It was quite dark and the hilly roads were bad. We had to go back to Banaganapalle, the nearest town where we could spend the night. We followed a car and were able to reach safely.

The next morning we woke up early and started our long journey to return back to Hyderabad.

Before you reach Kurnool from Hyderabad, take a 10 km detour to reach Alampur, famous for the exquisite Brahma group of temples.

Worth a stop on the way, this is the place where Konda Reddy, a revolutionary sacrificed himself for the country.

An excellent place to take a break 110kms from and appreciate nature’s creation of igneous rocks. APTDC has a garden restaurant here.

How to go to Yaganti?

By Road
Yaganti is located 340kms from Hyderabad and 70kms from Kurnool
From Hyderabad, take NH7 to Kurnool and then NH18. Take right to Banaganapalle. Yaganti is another 18kms from here.

By Rail
Nearest railhead – Panyam; there are regular trains from Secunderabad.

There are limited facilities to stay in Yaganti. There is only one basic hotel with AC and non AC rooms – Brahmini Residency Cell: 9180011129, 9963150097. If you are going on a weekend, book your room in advance.
The best place with accommodation is Kurnool. Banaganapalle, which is the nearest town 17 kms away has basic places to stay.

Food: These are no restaurants in Yaganti, so don’t forget to carry your own food and water.

Be there till late evening. There are a lot of interesting activities happening there. Interact with people as you shoot.