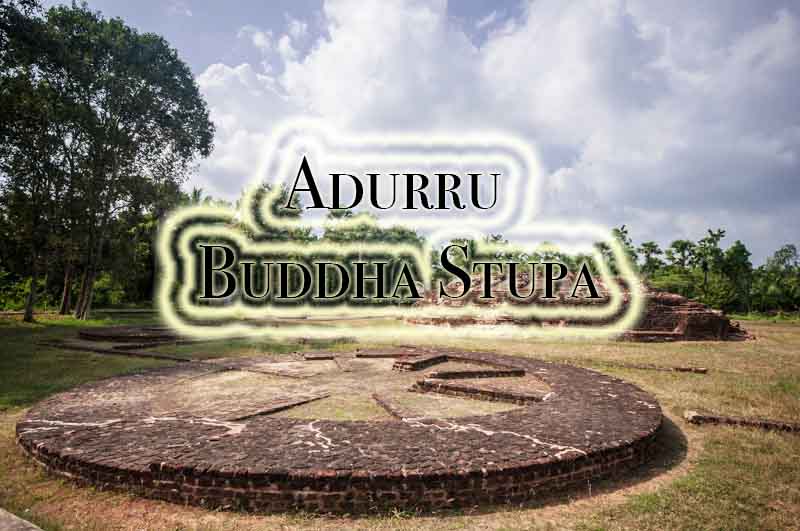 Adurru, name of a village I never heard before. We had been to several unknown places with very little information and almost all of them were pleasant surprises. Adurru was definitely one of them.

About Adurru
Adurru (or locally DubarajuGudi) is a 2400-year-old Buddhist site in India. Located in Razole taluk of East Godavari district of Andhra Pradesh close to the banks of the river Vainetaya, a tributary of river Godavari river very close to the Bay of Bengal.

The foundation of the stupa here was laid by Sanghmitra, Ashoka's daughter on her way to Sri Lanka.

This site was excavated by the Archaeological Survey of India in 1923. The operation unearthed several stupas, chaityas and viharas. The Mahastupa, built on wheel-shaped plan 17 feet in diameter with a raised platform running all around the drum and Ayaka platforms in cardinal directions.

As for most of our trips, this place was planned to be covered in one Sunday (that's the only day we get for traveling). We took an overnight train from Hyderabad to Palakollu.

As I got up in the morning, this is what I saw.

We relate to similar places only with Kerala but there are plenty of them in Andhra Pradesh.

These pictures were taken from the running train on the way.

We knew the place as Adurru but were ignorant of the local name. Not knowing the local language also made it difficult to communicate. Finally, we were able to reach the village by an auto – Adurru :)

It was a nice walk in the small village. We passed by several fishing ponds – these areas are famous for their fish production.

The first sight of the site.

There was no one except us. Though we always complain about crowded places, its not difficult to find places where there are no people at all.

We sat down for some time and heard a group of parakeets chirping. I looked up on the trees and found this one...

Then, we went waking around the village.

We met some village children and communicated through the language that everyone understands – smile.

There was a temple in the village though there were no worshipping people.

There were many traditional houses in the villages. The prosperous had houses made of brick and cement while some of the houses where made of mud.

We saw some round-shaped stuff on the trees. In telegu, they are called pidakalu or cow-dung cakes. These were used in all parts of rural India as fuel to cook food. In Bhogi festival, it is used as Bhogi Manta (Holy Fire or sacred bonfire) All the useless household articles are offered to the fire signifying the removal of the sins from the houses. Burning cow-dung cakes also drives away pests and mosquitoes. Since most households have now shifted to more ‘civilised’ forms of fuels like LPG, mosquito is becoming a big nuisance in villages. Mosquito borne diseases like malaria is on the rise.

It was time to go back. The railway station was very clean and tempted me to try some photography to kill time.

Another one-day trip but memories for a lifetime.

Hope you enjoyed the journey with me.

Feel free to ask me any questions, I will be happy to answer them.

A request – As you can see, these places are untouched by tourism. These places are for us to see and enjoy but we need to do it responsibly. Let's preserve their beauty for future generations to relish.