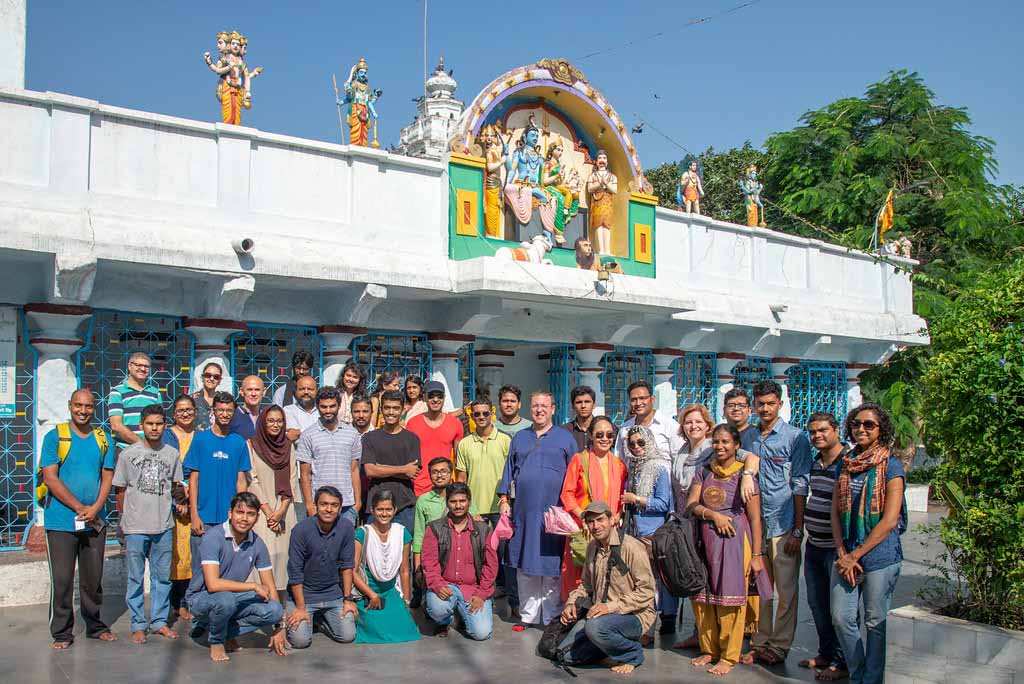 October 2nd, Mahatma Gandhi's birthday - what does it mean to me? Well, honestly, most of the time, I remember him for 5 minutes, thank him for the holiday and make plans for some travel.

This year, I did not have any travel plans and was looking for spending the day in a meaningful way.

Fortunately, I came across this event organized by Hyderabad Trails in collaboration with the Dy. British High Commission, Hyderabad.

I had been to several walks with Gopal Krishna, the founder and leader at Hyderabad Trails, and had thoroughly enjoyed them. Unfortunately, I couldn't make for most of the walks as they are during the weekends when I do my Photography Classes.

The event started at 7am. I was glad to see a good turnout of 40 people.

I was also pleasantly surprised to meet my friend and famous wildlife photographer - Mr.Masood Hussain in the walk.

We gathered at the spacious courtyard of the Shivalaghat Temple, Puranapul. The temple is located just beside the Musi river.

We had a round of introduction but in a different way. Since the walk was on communal harmony, we had to talk about ourselves and our religious background. It was not a surprise that most of the participants talked about being brought up in a religiously tolerant environment. The Hindus talked about going to dargahs and the Muslims talked about celebrating all the festivities together. The group was a great mix of people from different states of India and some from different parts of the world.

Mr. Andrew Fleming, the British Deputy High Commissioner addressed the group. It was great to see him support the walks with much enthusiasm.

After a few ice-breaking sessions, it was time to get going on our feet. We were encouraged to enter all houses of worship that were supposed to cover during the walk. Since we had people from all faith, we could ask our partners anything related to other faiths.

We entered the Shivalaghat Temple. This is a 500-year-old temple. The old part of the temple is all made of stones, but doesn't look old as its white-washed. I had passed by this place multiple times, but this was the first time I was entering the temple.

It was a Shiva temple. On the inner walls of the temple were colorful statues from Hindu gods like Shiva, Rama, Hanuman, etc. After a quick round of the temple, we proceeded.

We took a quite group shot before we left.

Our next stop was the Dargah Hazrath Syed Shah Moosa Quadri, on the Hussaini Alam road near Puranapul. This part of the city is quite pristine. Wherever you look, there is something antique about it.

I stopped for a moment to take a picture of this old tea shop. From the body language of the people, I could make out that most of them were in no hurry and really enjoying their cup of tea.

Next, this old flour mill attracted my attention. During my childhood, we used to go to a similar shop. For some reason, I used to like the smell of this freshly ground flour. Unfortunately, they all have disappeared due to the big brands, and now we buy them from supermarkets in polythene packets.

Then I noticed this playful cat outside the shop. He was trying to give me a hand shake. I paused again to take a shot.

The prudent volunteers were keeping a watch that I was left behind and were asking me to catch up with the group.

We entered the Dargah through the massive gates. The Dargah looked very similar in architecture to the other ones I had seen, like the Ajmer sharif, though a little smaller version.

I had always loved visiting dargahs. My favourite one is Dargah Yousufain near Nampally and I go there often to find solace in troubled and good times. Even during my childhood, we used to go to a nearby dargah to take blessings.

During the song, these two kids of the flower seller joined us. They knew the song so perfectly. When we asked, we came to know that they had learnt it in school.

After that, Susanne sang a beautiful song in Hungarian. Though I could not understand the meaning, we could sense the feelings of the song. We had some poets in our group as well. Taufique recited a poem on communal harmony.

The departed family members of the of the saints family rests here under the tamarind trees.

We carried on to our next stop - a Dawoodi Bohra muslim neighbourhood in the area. On the way, we found some more grand doors and buildings.

Bohra Muslims is a community which is a sect of Shia Islam. Entering the locality was like being transported to somewhere else.The most prominent building was one was a flat built very traditionally with colourful floral motifs on the walls. The owner, Mr. Dawood Shikary was kind enough to invite all of us in his house.

Mr. Dawood's family members told us about how passionately be had build the house with his own ideas. Inside the house was like a palace and museum. Every corner of the room had something to do with arts. He had collected artefacts from all over the world. They had migrated back to Hyderabad after staying for a decade in Saudi Arabia.

We took a group shot and went ahead.

We passed by Udasin Math, a hindu ashram. We had less time and decided to move on.

On the way, we found this cart with earthen products. We don't things like this in the newer part of the city.

A little ahead, we saw a man building a framework with bamboo. I went and asked what that was. He said, it was Raavan. It is being built for the forthcoming festival of Dussara. These effigy of Ravan are burnt to signify the victory of goodness over evil. It was really very interesting to see this. From the ceiling, there were some tigers and elephants hanging from the roof. They are used during the festivals.

We hurried to our next place, Alakh Ka Math - a Hindu temple at Kesarhatta. Inside there was a small temple. It is taken care of the family that resides here.

I was pleasantly surprised when Imtiyaz recited my favourite poem - Where the Mind is Without Fear by Ravindra Nath Tagore. It is my most favourite poem and I believe that someday, we will achieve that kind of freedom.

Mr. Andrew Fleming, the British Deputy High Commissioner addressing the group at the end of the walk.

Our last destination was the Mecca Masjid. Like all great things, we reached the end of the walk and went back home with a sense of fulfilment.

It was one of the best walks I ever did so far. Absolutely enjoyed it.

If you want to join for more walks please check out Hyderabad Trails.

A note of Thanks to the organisers - Hyderabad Trails and Gopal Krishna and to Mr. Andrew Fleming, British Deputy High Commissioner, who, not only supported the event but also present during the walk. Also to the volunteers - Taufeeq, Prem, Micky, Sagar, Mani, Mukesh, Faiz and Zara for making sure the walk happens smoothly without any delays.