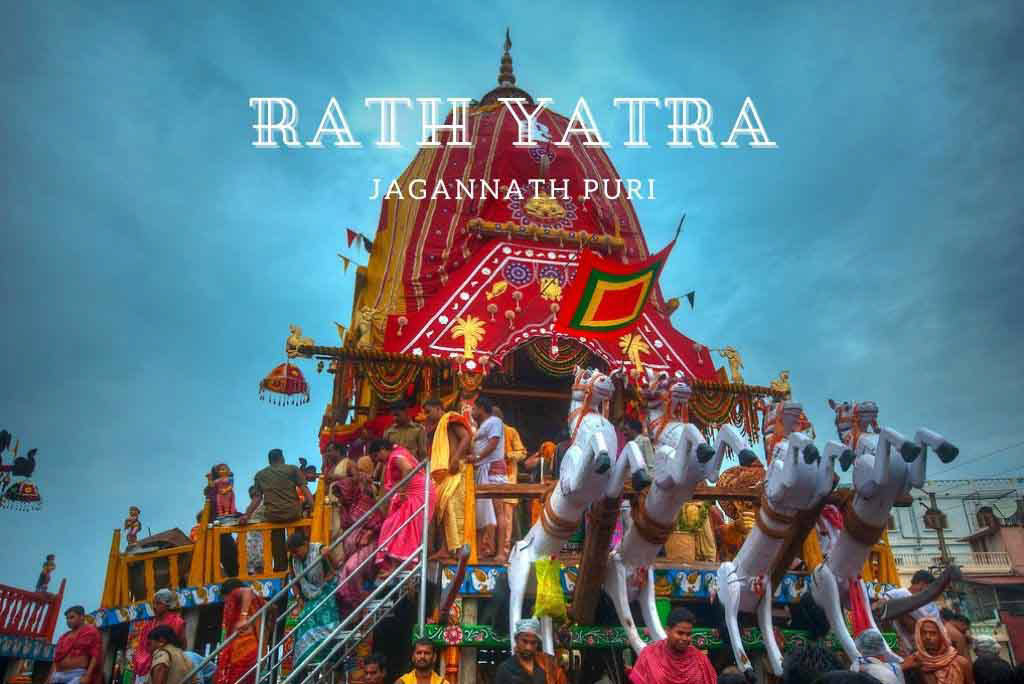 What is Rath Yatra

Rathi Yatra is an annual chariot festival of Lord Jagannatha and his brother Balabhadra and sister Subhadra. It happens in the city of Puri in Odisha state, India.

It is one of the most spectacular congregations in the world, the other one being the Kumbh Mela in Prayagraj.

The wooden statues of the gods are taken to their Aunty (mother's sister's) place Gundicha Temple for a short visit in massive colorful chariots. In this epic journey of 3 kilometers, the gods are joined by his devotees who come here in millions from all across the world.

The Rath Yatra begins on the second day of Shukla Paksha the month of Ashadha, as per the traditional Oriya Calendar. It generally happens in June or July.

The term Nabakalebara is an ancient ritual followed in the Jagannath Temples when the Idols of Lord Jagannath, Balabhadra, Subhadra, and Sudarshan are replaced by a new set of Idols made of neem wood. This ritual happens once in 9 to 19 years. It happened the last time in 1996.

Much before the day of the Ratha Yatra, pilgrims started pouring in from all over the world. However, on the day of the Yatra, it's unbelievable. An estimated number of one million people come to pay their homage to the Lord. This year, there is a special Nabakalebar Puri Rath Yatra Festival.

The following is my endeavor to capture the festival.

On the day of Rath Yatra, the Gods – Jagannatha and Balabhadra along with their sister Subhadra embark on their annual sojourn to Gundicha temple through the Bada Danda or the Grand Avenue.

It is interesting to note that the English word – ‘juggernaut’ finds its origin in this festival due to the unstoppable force with which the chariot moves.

Each ratha (or chariot) has a specific name, dimensions, color with a specific number of wheels. As a custom, the woods used for the chariot are procured from the erstwhile princely state of Daspalla.

The devotees believe that the ‘darshan’ of the gods during this time grants moksha or salvation.

There are many interesting legends associated with the festival. I choose to share this one with you. One of which is the story of a Muslim poet named Salabeg. Surpassing all odds, he went to Puri to visit Jagannath temple. Since non-Hindus are not allowed in the temple, he was disappointed and went to Brindavan to know more about god.

Since anyone can catch a glimpse of the lord during the Rath Yatra, he was traveling back to Puri. Unfortunately, he fell sick and prayed to Lord Jagannath to wait until he comes. And that’s what happened. Nandighosha, the chariot of the god, didn’t move despite all the efforts until he arrived. To commemorate the miraculous event, every year, the ratha pauses near Salabeg’s Samadhi.

Most of the people who come to witness the festival cannot afford a plush hotel room and sleep in the open.

Even before the yatra begins, people start gathering around the chariots.

The Rath begins to move…

Many people break coconuts on this auspicious occasion.

People get dressed in form of gods and goddesses and chant bhajans and kirtans on the way.

There are volunteers from several organisations who provide support to devotees. Some distribute food and drinks. Here they are sprinkling water to get relief from the hot sun.

The rathas are decorated with beautiful paintings based on mythological stories apart from beautiful designs.

Capturing a glimpse of the Ratha with a cellphone.

A man dressed as Hanuman - the monkey god. The musical instrument Khol is a very important part of doing Keertans.  I also saw a group of devotees of Asaram ji Bapu, who is in prison in some sexual abuse case. They were holding placards writing - Bapu is Innocent.  Where there are pilgrims, the stuff they buy follows...

"This is my final price - do you want it or not?" A Hi-tech sadhu (ascetic) trying to capture the moments with his cell phone.  Entertainers from Andhra also reach here to show their talent.  The management was doing a great job. Ambulances were roaming around to cater to emergencies.  After spending several hours walking all around, I took a space in this gallery. I got the advantage of the last minute booking and the ticket cost me Rs.250/- There are some restaurants providing full day package of sitting and enjoying from the balcony at Rs.3500/- per person (including breakfast and lunch).   These crowded areas are also pick-pocketing.  Be very choosy on what you carry and carry it carefully. And the Rath moves! This is the time when the maximum number of people can be seen concentrated in one place. I was so glad I was not one of them, though I going them after sometime.  The concentration of the crowd is around the Ratha. Sometimes, the crowd goes out of control. There have been cases of a stampede in the past. A mere glimpse of Lord Jagannath on the chariot, or even to touch the chariot, is considered to be very auspicious. As you can see in the picture below, there is a huge tussle to touch the rope and pull it. Recently, the administration has been very strict on who can come near the chariot. There was several layers of shield around the Ratha. The Ratha finally reached Gundicha temple where it is parked with the gods seated in the rathas. People buy lamps to offer to the gods.

The Rath Yatra festival is the only occasion when non-Hindu devotees, who aren't allowed inside the temple, can get their glimpse of the deities. For me, as a photographer, this is the only time, I can take pictures of the god.

I end this post with some sweet prasad (offering to the gods) which people take back home.

What I did not like about this event is the role money plays. The greedy pandas or priests can get you inside the Ratha bypassing all the queues. There was one particular panda who allowed a person to climb onto the rath after taking money. There was one poor person who tried to follow him and he was hit really hard by the panda.

Overall, it was an experience for a lifetime. Of all the congregations that I have seen earlier, this was another different one. The more I travel and witness these festivals, the more I realize how diverse our country is. There is so much so see and explore.

Reach here a couple of days before if you want to document the festival.

There will be a huge crowd, so carrying less gear is advisable.

There are some hotels opposite the Mandir who charge a fee but you can get a great view of the Ratha. Book a place there.

Shoot day and night, you will surely find something worth shooting.