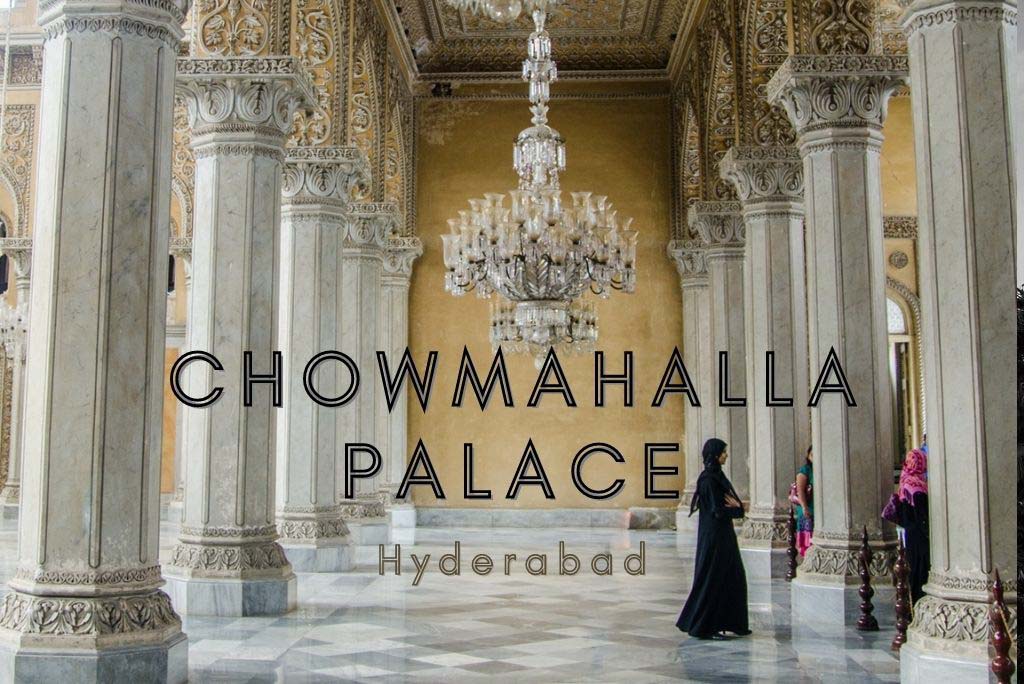 Chowmahalla Palace is a must-see place in Hyderabad.

If you are visiting Hyderabad, I can take you to the best places at the right time, so that you can make the best use of your time and return with some great pictures.

It was built in the 18th century which is located in the old city near the Charminar.

The meaning of the place is “Four Palaces”, Chow means four in Urdu, and “Mahalel” meaning palaces, is the plural of the word “Mahalat”. It is said that Chowmahalla Palace is an inspiration by the Shah Palace of Tehran in Iran.

Chowmahalla Palace's construction started by Nizam Salabat Jung in the year 1790 and was completed during the reign of 5th Nizam, Afzar-ud-Daulah, Asaf Jav V between the years 1857 and 1869.

The palace has a combination of many architectural styles like European, Rajasthani, Persian and Indo-Sarcenic. The Nizams used this palace as their venue to entertain their important visitors and special guests and ceremonial functions. Formally the palace covered 45 acres of land but today it remains only 14 acres.

The distance from Chowmahalla Palace To Golconda Fort is 9kms and takes about an hour to go.

The palace is open from 10:00 a.m. To 5:00 p.m. Closed on Fridays and Public holidays.
Plan your tour accordingly.

This architectural monument received the Asia Pacific Merit award for a site that conserved the cultural heritage of the region in the year 2010.

The palace is rented out for the elite to host musical evenings, special dinners, and events like marriages.

The Palace is owned by Prince Mukarram Jah, who is the descendant of the Nizams. He is the grandson of Osman Ali Khan, the last reigning Nizam of Hyderabad state

One can explore the unique collection of pictures from the Nizam era. Not only these even the vintage cars, furniture, buggies, crockery, ensembles, and guns and rifles are all on display. There are two courtyards for Chowmahalla Palace which consist of fountains, palaces, and gardens.

Southern Courtyard:
It is the oldest part of the palace which consists of 4 palaces - Afzal Mahal, Mahtab Mahal, Tahniyat Mahal and Aftab Mahal

Northern Courtyard:
Bara Imam: It has a number of rooms and long corridors. This used to be the administrative wing of the palace. It has the Mughal domes and few elements of Persian architecture which adorns Khilwat Mubarak. Opposite to it is the Shishe Alat mirror image where the rooms were once used for officials guests

Khilwat Mubarak: It is right in the center of Chowmahalla Palace and was the seat of the rulers of Asaf Jahi. This has massive pillars and a grand durbar hall where the Nizams conducted their court and other important ceremonies. Recently the 19 stunning Chandeliers of Belgian crystal was added to this hall.

Clock Tower: It is above the main gate of the palace. It's known as Khilwat Clock. The clock in the tower has been ticking for around 250 years.

Council Hall: This building consists of all the collections of manuscripts and rare books including vintage cars, furniture, buggies, crockery.

Roshan Bangla: It is said that the 6th Nizam named this structure after his mother Roshan Begum.

Sometimes, the palace hosts some dance programs. It looks at its best during those times.

Thanks to all my Photo tour participants for joining me for the walks for recommending me to others.