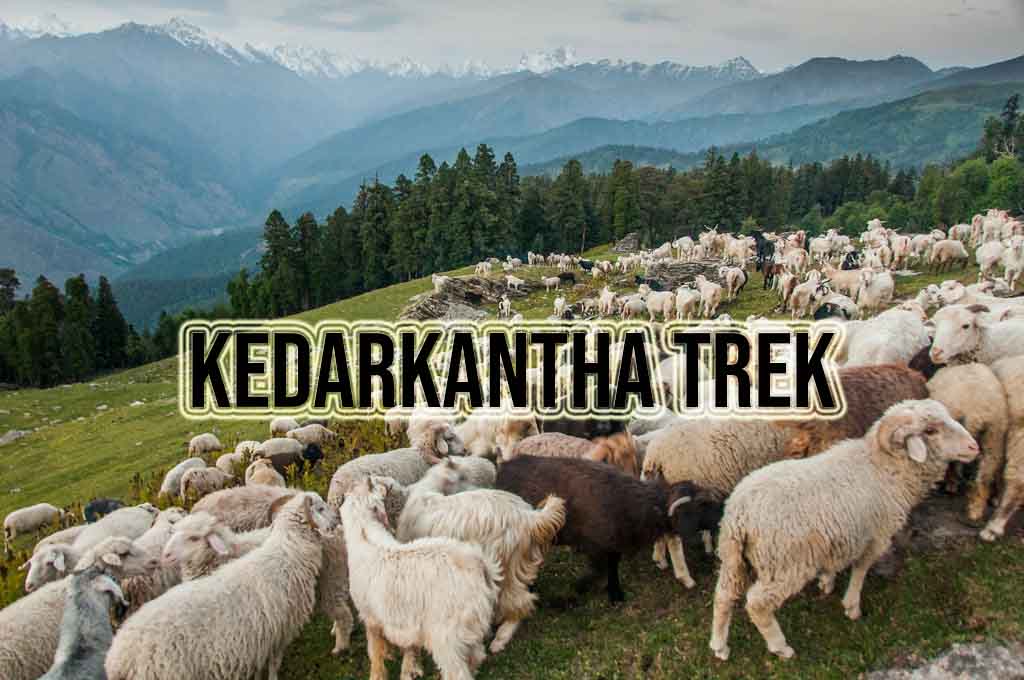 Kedarkantha – one of the most beautiful treks that I have ever done. We chose this route for our yearly pilgrimage to Himalayas this year. This is an easy grade trek and is very much recommended for beginners.

This is the first of the three part series on my experience on the trek of three days.

We took a bus from Dehradun to arrive at Sankri village by evening after an 8 hour drive. It was a beautiful village. I will write a separate post on the stay there.

Though we generally go out in a group, this time we thought of doing it independently. Just my wife – Smita and me along with a porter and a guide. Since we were not in a group, it turned out to me one of the most memorable treks. We could stop where we wanted and continue at our own will. The biggest challenge while going in a group is to catch up with them if you have stopped to take a picture.

We got up early in the morning, had good breakfast and was all set to get lost in the wilderness. Just a few kilometers and the woods are there to welcome you. The trek was of four kilometers and if you complete this in 5 hours, you did a good job.

We passed by some of the last houses to be seen on the trek.

Horses and mules are used to carry essentials to the far away villages.

Some beautiful flowers on the way.

We reached our campsite on time at around 1pm. This place is called Juda Talab. Our guide was skeptical if we could stay there as the water in the lake was not fit for drinking. We were relaxing as they set out to search for a source of potable water. Fortunately, they found one closeby.

It was time to pitch our tents and wait for lunch. For the next 3 days, our lunch and dinner would be modest roti, dal and khichdi (which tastes like heaven after a tiring walk).

Our guide also took us to a rock which had pre-historic signs. It was interesting how they discovered these in such an isolated place.

In the hills, the day starts early and ends early as well. Dinner is generally served before sunset when there is enough light.

We stayed for sometime near the fire to warm up before dropping dead in the cold of the night.

We had ambitious plans for this day. Since we had almost half the time recommended for the trek, we decided to overtime and reach the peak today.

It is such a great feeling to be amidst nature. In front of the huge trees, we realize how small we are.

We passed by herds of cattle and their cute owners.

It’s never a bad idea to take a break and shoot.

We crossed the steep stretch of jungle and were delighted to see the meadows. There were cattle grazing around.

There was just one small hut made of stone in the whole expanse. This is the only shelter for the cattle grazers. These people lead a very tough life. They stay away from their family for months (who live in the village down) just to graze the cattle. There is no way of communication. Once their food reserve is exhausted, they go to the village, replenish their supplies and come back.

These people were very warm and welcoming. There were seeing human being after months. We had hot tea there and a lot of milk (I love milk :)). They have plenty of milk but no one to drink them.

We were recharged fully and were ready to finish the next half of our journey for the day.

Then came the twist in the story…

We could see the rain approaching us. We had no option but to camp there. There is always a certain level of uncertainty, when you go for a trek and no matter how much you plan, its ultimately the weather god who decides your itinerary.

Our campsite was in a great location – a small stretch of meadow with great views all around.

We spent the evening watching the sheep. It was interesting.

The shepherd uses very basic tools to get the wool out of the sheep. He then makes them into thread. Once he has enough of them, he will then sell these rolls of thread in the market which will eventually be made into a coat (like the one he is wearing)

These people have just the bare necessities to survive. You can see all his belongings in this picture. A water pot, a pressure cooker, a blanket and a polythene sheet. I was wondering how tough they are. We feel cold in our high altitude sleeping bags in these environment.

As he makes the threads, his pressure cooker whistles. It was time for dinner.

Watching the sun setting down after dinner…

The shepherd drove the animals to their warm shelter for the night as we were getting preprepared to spend another beautiful night under the star-studded sky.

We woke up early and were ready to get to our destination – the Kedarkantha peak. We had a long day today. Since we could not reach the peak the last day, we had to do that and get back to the village before dark.

The views were amazing!

We reached the peak, stayed there for some time and started our journey back to Sankri.